The Maggie Allesee Department of Theatre and Dance, Wayne State University, and the Fisher Theatre on behalf of the Nederlander family presents "The Apple Award" named for Sarah Applebaum Nederlander. The award is presented annually at The Fisher Theatre in Detroit to a nationally recognized theatre professional at a black-tie gala benefit event. Recipients receive $10,000 and a crystal apple signifying the clear vision and care for the performing arts that characterized Sarah Applebaum Nederlander. 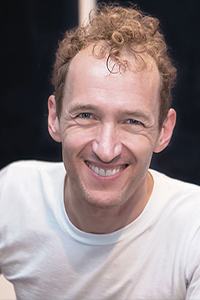 The Maggie Allesee Department of Theatre and Dance, a program within the College of Fine, Performing and Communication Arts at Wayne State University, is thrilled to honor Michigan native and Tony Award-winning producer of "Hamilton," Jeffrey Seller, with the 2019 Apple Award on Wednesday, March 27 at the Fisher Theatre.

A private, pre-show reception with Mr. Seller will be held at the Fisher Theatre before guests attend "Hamilton" that evening at 8 p.m.

On Thursday, March 28, Mr. Seller will meet with Wayne State University Theatre and Dance students for a conversation about his Michigan roots and his rise to one of Broadway's most-celebrated producers. This event will take place in the Studio Theatre at the Hilberry (4743 Cass Avenue, Lower Level, Detroit, MI 48201) at 11:30 a.m.

Jeffrey Seller is the winner of four Tony-Awards for Best Musical:  Rent (1996), Avenue Q (2004), In the Heights (2008) and Hamilton (2016). Jeffrey also produced and/or developed De La Guarda (1998), Andrew Lippa's The Wild Party (2000), Baz Luhrmann's direction of Puccini's La Bohème (2002), High Fidelity (2006), the Broadway revival of West Side Story (2009) and Sting's The Last Ship (2014).  Seller, along with former business partner Kevin McCollum, created the first Broadway lottery for Rent, which, for 22 years, has been a popular way to see Broadway shows, often in the first two rows, at an affordable price. He is the only producer to have produced two Pulitzer Prize-winning musicals--Rent and Hamilton.

Jeffrey was executive producer of the NBC Drama Rise (2018).  He opened his new Broadway musical, The Cher Show, at the Neil Simon Theatre this past November.  In addition to producing, he directed a new musical based on Jules Feiffer's young-adult novel, The Man in the Ceiling, at the Bay Street Theater and Fly at Dallas Theatre Center.

Jeffrey grew up in Oak Park, Michigan and is a proud graduate of the University of Michigan.

Sarah Applebaum Nederlander was born on Columbia Street in Detroit on Christmas Day, 1894. She lived her entire life in the Detroit area, graduated from old Central High School, now Old Main on the campus of Wayne State University, married David T. Nederlander in 1916 and with him raised five sons and a daughter. She was a homemaker and helpmate and the love of her husband and children's lives. She belonged to a number of organizations including Hadassah, ORT (Organization for Rehabilitation Through Training) and the Sisterhood of Temple Beth-El. While the children were growing up, her home was open to their friends who could often be found playing baseball or football in their backyard.

D.T. frequently brought show people home for dinner and "Apple" never disappointed them. Many in the theatre became her friends including Carol Channing, Deborah Kerr and Gloria Swanson. And though she never knew who D.T. was going to bring home, she welcomed them all … Eddie Cantor, Florenz Ziegfeld, J.J. Shubert, George Jessel, Phil Silvers and many more. When Al Jolson appeared in Detroit he would call and ask her to send down her roast chicken. Then at curtain call, he would sit on the edge of the stage and tell the audience that "Apple made the best roast chicken in the world."

Apple's ability to recognize talent was phenomenal. She heard Helen Morgan singing at the old Oriole Terrace on Brand Blvd. She told D.T., who wired J.J. Shubert to come to Detroit to hear her. He did and immediately signed the singer. When Apple saw Carry Grant dancing in a vaudeville show she told D.T. he was so handsome, he was going to be a star.

Apple was a beautiful woman, regal and elegant, and once voted one of the ten most beautiful women in Detroit. Her children adored her. They talk of her sense of humor, her dry wit, the one‐liners that would break them up and the fact that she managed the family lovingly and calmly. Sarah Applebaum Nederlander was the foundation that anchored a husband who began the theatre dynasty.

Today, that dynasty is carried on by her children.

About the Nederlander Family

In 1931, the Detroit Opera House became a victim of the depression and rang down its curtain for the last time. It was not until 1941 that D.T. found another opportunity to get back into theatre management. Once again with the help of the Shuberts, he took over the Orpheum Theatre on Lafayette, an old Detroit vaudeville house. It was renamed the Shubert‐Lafayette, but later the "Lafayette" was dropped when D.T. took full control.

Through the entrepreneurship of his five sons, the theatrical enterprise that D.T. started grew exponentially and another golden era of show business began in Detroit at the Shubert. Headliners included Fred Allen, Chic Sales, Jack Benny, Eddie Dowling, the Weaver Brothers, Gloria Swanson, Sylvia Sydney, Rex Harrison, the Lunts, Tallulah Bankhead, Julie Harris and Bette Davis. Later the Shubert hosted several shows produced by George C. Scott who was attempting to make Detroit a base for live theatre in Michigan. Before the theatre was torn down in 1963, it served as a tryout how for Tennessee Williams' Night of the Iguana.

In 1961, the Nederlanders assumed the management of the newly redesigned Fisher Theatre. From the moment it opened, it was a success. The Nederlanders built the country's largest subscription audience and offered enticing choices of both light and serious theatre. The Fisher also proved to be a popular place to try out shows before heading to Broadway, including Fiddler on the Roof, Hello, Dolly! and Sweet Charity.

In addition to the Fisher, the Nederlander family operated other Detroit theatres including the Riviera Theatre, where Beckett with Sir Lawrence Olivier, Gypsy with Ethel Merman, and the first road company of My Fair Lady were presented.

During the 1960s, the family's theatrical projects expanded to Chicago, New York and Baltimore. In 1966, D.T. bought the venerable New York legitimate house, the Henry Miller Theatre on West 43rd Street, which was renamed the Nederlander. The family would ultimately own nine theatres in New York City.

In 1967, D.T. passed away and his oldest son, Harry J. Nederlander, passed in January 2002. Yet, the Nederlander family legacy continues. They are the most experienced and successful operators of the largest, most prestigious entertainment facilities in the United States, Canada and Great Britain. The Nederlanders are unique in economic stability, size and diversity of their professional resources, and their demonstrated commitment to the development of successful, first‐class entertainment venues. As theatre developers, owners, managers, producers and promoters, The Nederlander Company, LLC continues to present outstanding plays, musicals, operas, ballets, symphonies, circuses and sporting events of the day.