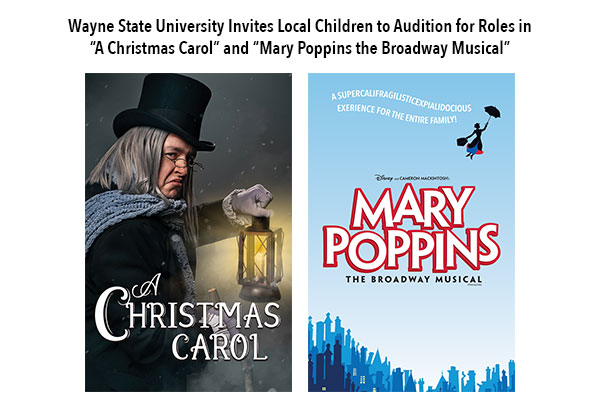 Available roles for "A Christmas Carol" include Young Ebenezer, Tiny Tim, children's ensemble, and others. Available roles for "Mary Poppins the Broadway Musical" are for Jane and Michael Banks, the children of the house. Doubling the casting of Jane and Michael Banks is a possibility, meaning that the children cast may be able to rotate performance dates. All backgrounds, genders, and experiences are encouraged to audition. Auditionees should prepare a song that best represents their talent. Callbacks, where the directors ask to see the auditionee one more time, will take place immediately after all auditionees are seen.

All children who attend will be given vouchers for one (1) free children's ticket to both productions.

"A Christmas Carol" is based on the story by Charles Dickens and adapted for the stage by John Wolf and Tom Aulino. The story follows Ebenezer Scrooge as he's visited by his former business partner, Jacob Marley. Warned that his humbuggery will curse him in the afterlife, Marley sends the Spirits of Christmas Past, Present, and Future to help Scrooge reform his curmudgeonly ways. Utilizing magical special effects and a mechanically marvelous set, "A Christmas Carol" will delight everyone who experiences it.

"Mary Poppins the Broadway Musical" is based on the stories of P. L. Travers and the Walt Disney film. It features original music and lyrics by Richard M. Sherman and Robert B. Sherman, with a new book by Julian Fellowes. New songs and additional music and lyrics are by Anthony Drewe and George Stiles. It is co-created by Cameron Mackintosh with Disney. "Mary Poppins the Broadway Musical," follows the Banks family as they struggle with life in Edwardian England just after the turn of the 19th century. The children, Jane and Michael, are terribly ill-behaved. Mrs. Banks is lonely and bereft, aching for dreams long ignored. And Mr. Banks just wants to live an orderly, well-established life. Helping them is the mysterious nanny who can talk to birds, magically transform a gloomy park into a painterly scene, and, just maybe, with a spoonful of sugar, get the Banks family back on track.

About the Wayne State University
Wayne State University is one of the nation's preeminent public research universities in an urban setting. Through its multidisciplinary approach to research and education, and its ongoing collaboration with government, industry and other institutions, the university seeks to enhance economic growth and improve the quality of life in the city of Detroit, state of Michigan and throughout the world. For more information about research at Wayne State University, visit http://research.wayne.edu/