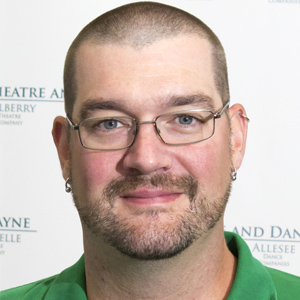 Matt Gribbin is the scene shop supervisor for the Maggie Allessee Department of Theatre and Dance. He started his career working for Stage Works, an independent theatrical production, supply and rental company, in Pennsylvania. He went on to work for the State Theatre in Easton, PA as house sound engineer and carpenter. He relocated to Michigan in 2000 and has been working as the scene shop supervisor since March of 2001. Since joining the staff at Wayne State he has worked as a carpenter and overseen student employees, at both the graduate and undergraduate levels, in constructing scenery for the Hilberry, Bonstelle and Studio Theatres. In addition to overseeing scenic construction, he has had the opportunity to design sound for A Dream on Monkey Mountain and provide technical direction for A Funny Thing Happened On the Way To the Forum, Little Shop of Horrors, Evita, Rimer’s of Eldritch and Black Nativity. He has also constructed scenery for Jewish Ensemble Theatre, Box Fest, Motor City Youth Theatre, Second City - Detroit and Berkley High School.