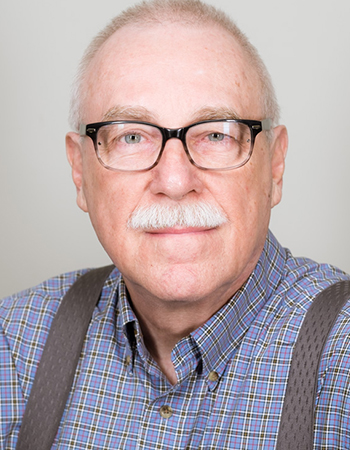 Other hours by Appointment through the department secretary.

James Thomas is a professor in the Maggie Allesee Department of Theatre and Dance, and interim associate dean for faculty affairs in the College of Fine, Performing and Communication Arts. He received his BA from St. Ambrose College, MA from Villanova University and PhD from University of Texas at Austin. He has taught at Mt. Holyoke College and Marquette University, and was associate dean of the School of Theatre at Florida State University. He was chair of the Department of Theatre at Wayne State from 1994 to 1999, and interim chair of the new Department of Theatre and Dance, 2010-12. In 2001, he established a summer study abroad program with the Moscow Art Theatre School which is in its 15th year of continuous operation. He has translated the books of the Russian director Anatoly Efros and is translating the rehearsal journals for Efros’ groundbreaking production of Anton Chekhov’s play The Seagull. He is author of The Art of the Actor-Manager: Wilson Barrett and the Victorian Theatre (UMI Research Press) and Script Analysis for Actors, Directors and Designers (Focal Press), which is in its 5th edition and is the standard text in the field. His latest book, A Director’s Guide to Stanislavsky’s Active Analysis, will be released by Bloomsbury Publishing. He is recipient of the Service Award from the Association for Theatre in Higher Education and the Outstanding Mentor Award and Murray Jackson Creative Scholar in the Arts Award from Wayne State.

PhD in Theatre History and Criticism, University of Texas at Austin, 1975

The Joy of Rehearsal: Reflections on Interpretation and Practice by Anatoly Efros, Translated by James Thomas, New York: Peter Lang, 2006.

The Art of the Actor-Manager: Wilson Barrett and the Victorian Theatre, Ann Arbor: UMI Research Press, 1984.